The picture showed a proud group of ambassadors. The hostess, a magnificent chef, was showing us some photos of her family history following an utterly sumptuous lunch, and as the centerpiece on the playroom wall hung a photograph from 1947.

It was a panorama style shot, more than a meter wide, as twenty one men stood shoulder to shoulder, eighteen of them in football kit and graced with Springbok blazers. The hostess’s Grandfather, R.E Ferriman was in the lineup, and I immediately understood why her own son had such gifts on the school sports fields and swimming pools of Johannesburg. As my eyes were drawn to this remarkable team of athletes, I immediately recognized another name. Sid O’Linn.

I recognized his face almost simultaneously as the face of his son with whom I played countless hours of sport, and who still today remains as one of my closest friends. Floods of memories came back in the instance of that moment, and I could dedicate this entire essay to the stories of Mr O’Linn and his sporting acheivements – none of which came from his own mouth. He was a double Springbok, having played both cricket and football for South Africa, and spent a decade with Charlton Athletic playing top league British football. He once famously batted for 326 minutes against the legendary bowling pair of ‘Fiery’ Fred Trueman and Brian Statham to make 98 before being spectacularly caught by a flying leap from Colin Cowdrey who denied him his first test century against England at Trent Bridge in 1960. Peter Pollock described him as dogged and determined, and the revered English journalist and cricket commentator John Arlott, wrote this of this humble servant of sport and true ambassador of South Africa:

In another word. Grit.

The stories of that South African football tour in 1947 to Australia and New Zealand are probably written up somewhere, and would offer sensational reading, but a quick look at the stats and a glimpse at Wikipedia make for some astounding reflection.

This included a test series win against Australia, and a white wash of the ‘All whites’ New Zealand team, and let’s remember, that these were much tougher times.

Leaving Durban on an unconverted 7000 ton troop ship, and travelling with over 600 ‘alien immigrants’ looking to settle in the antipodes, they would only return 6 months later due to there being no boats to take them back as a result of the Second World War. This was no quick flight with business class service, chilled glasses of orange juice and a cold refresher towel. Instead, the person who paid them the most attention on their long and uncomfortable journey was a habitual criminal who posed as bogus Doctor. Faced with dock strikes on arrival, they carried all their own bags, and at seven men to a room with no beds, accommodation could best be described as diabolical. Sanitary conditions were worse. Whilst the Australian team flew around the country to play their games, the South Africans travelled by train, and the standards of food intake were in line with both their discrepancies in digs and travails of transportation. The refereeing was politely described as ‘home ground’ – one might argue that nothing has changed in 75 years, yet the only complaints came from the manager, James Barbour, and the entire team distanced themselves from his comments. They continued to play, and play magnificently well as amateurs with their three British Pounds per week for out of pocket expenses, while their professional opponents were paid twelve pounds per match on top of all expenses covered.

It is not true to say they received no help. Consol footwear donated the football boots, Vulcan Rubber Works provided the training shoes, and The United Tobacco Company supplied ‘cigarettes for the whole tour’. In general however, they received so little, and yet they gave so much.

This week our National football team, Bafana Bafana embarrassingly bowed out to Sudan in the Afcon 2022 qualifiers. My misogynist self might have said that they ‘curtseyed’ out, but that would be an insult to our women’s teams of both sporting codes of cricket and football who have stood up recently and shown some gumption.

Perhaps like the 1947 touring springboks, with the character shown by a nineteen year old Sid O’Linn, our men’s football team might remember that they are playing first and foremost as ambassadors, and not as spoiled sportsmen handsomely paid to complain their way out of ineptitude and into the comfort of mediocrity.

And in all things, it would pay to show some grit. 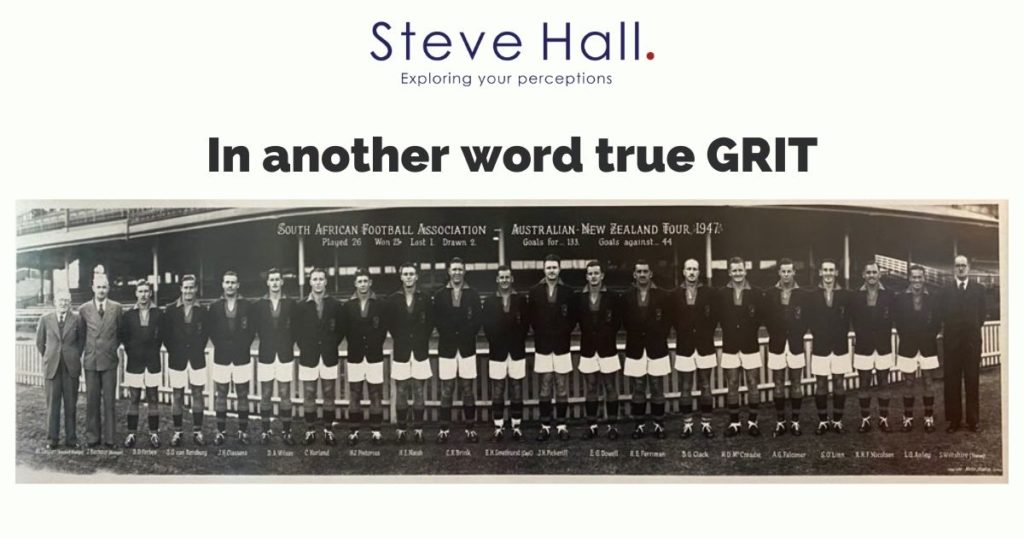