The sixteen kilometer stretch of road between St Francis Bay and Humansdorp in the Eastern Cape of South Africa is a gorgeous part of the world. Along the road there are three quite different river crossings; the usually dry sand river, the tidal Kromme and the gorge of the Swart Rivier. In between these river systems are patches of farmland which vary from game to dairy to bright green circles of crops, and a drive along this road will often yield two of our National emblems – the Springbok and the magnificent Blue Crane. In the distance the rugged Tsitsikama mountain range stands as a barrier into the best kept secrets of the Baviaanskloof, and towards the East one is rewarded with bright blue flashes of the Indian Ocean.

Inevitably, as one approaches the township outside Humansdorp, there is a change of scenery as struggling municipalities battle to contain the scourge of litter and the surrounding fences are often festooned with the National flag of the plastic bag. The sidewalks are eroded, the cutting unkempt, and the emergency lane is usually taken up by a broken down car, a tribe of goats or perishing black bags of as yet uncollected refuse.

Except for one patch of land.

The ‘stop-nonsense’ pre-fab wall here is neatly whitewashed like a quaint sea cottage and even the corrugated iron sheets have been similarly painted. The wall is decorated by perfectly placed garden boxes, hung at the same heights, and green shots of growth are visible against the bright white backdrop which is also broken up by the lavender purple hues of some proud agapanthus. Two wooden starfish flank a carved gourd as the centerpiece of this artistic wall, and an old birds nest rests above them. From the ‘dubbelup’ – the gate from this home down to the roadside, lies a perfectly terraced pathway where the gravel is levelled into large steps shored up by symmetrically cut logs of wood. On either side of this impressive walkway are beautifully manicured beds of flowers, rockeries with water-wise plants and succulents, low trimmed hedges and ensembles of stone as one might find in a Japanese Zen garden.

All of this is terraced and tended by one man, and you cannot script this stuff – his name is Perseverance.

He stands proudly with his strong forearms and the earth crusted hands of a landscaper resting on the handle of his home made wooden wagon which he uses to collect trash and haul it off to the recyclers for much needed cash. It is a job he says he has to do because thanks to Covid, he lost his previous one as a painter. I realized immediately why his wall looked so clean. When complimented that this garden must have taken a lot of work, his reply was typically humble:

“When you love doing something, it doesn’t feel like work.”

Covid has been particularly tough on him as his wife left him for a better man he says. A richer man maybe, but certainly not a better one, and it came as no surprise that his children preferred to stay with him.

When a man has such love for the world around him that he will beautify it and tend it for free, which child wouldn’t want to be a permanent part of that heart?

He plans to expand his gardening to include vegetables on an unused tract of land across this road. I cannot wait, I will be an ecstatic customer.

While the municipal workers go on strike in the local haven of St Francis Bay, and upend all the refuse bins and scatter them across the streets, break the bottles on the road and trash the environment with the rubbish they are paid to collect, Perseverance makes his world a more beautiful place and he has no job.

As I climbed back into my car, I couldn’t help myself, and I asked him if his name really was Perseverance. He said it was, and realizing I was scratching for something deeper, he added after a smile punctuated pause, that his isiXhosa name was Lithemba.

I guess sometimes we are not supposed to know the answers of why some people with salaries will strike and cause destruction, while others with nothing just continue to give, but I left with a new way of seeing and a living example of Hope and Perseverance.

Two precious characteristics wrapped up and landscaped in the same grounded character.

Lithemba Perseverance Booi showed me that perhaps Hope And Perseverance walk hand in gardening glove with each other. You can’t have one without the other, and no significant victories or triumphs exist without both.

I wish some of our municipal workers would visit this remarkable man’s garden. 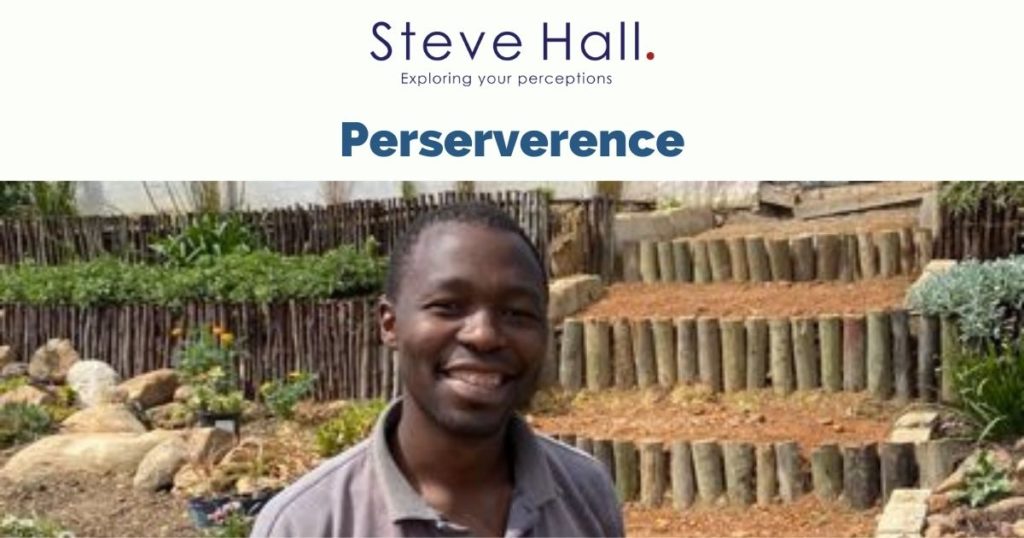