MAKING MAGIC OUT OF THE MUNDANE

There was a stir in the North West corner of Ellis Park. Before any Rugby Test Match at this iconic Highveld venue, there is always a stir, but this quarter of the stadium seemed more alive than even the sunnier and generally more raucous East stand. The crowd were on their feet and there were miniature versions of the Mexican wave going back and forth. Every now and then a small pocket of spectators would erupt and grab at the air like flower girls collecting falling confetti, or small boys bursting balloons. There was a childlike wonderment in their antics, and it begged an answer as to why the energy here was palpably higher than in an already pumped arena.

In a scrutiny of the sidelines, where substitutes warmed up and security sauntered, there stood a cannon bombing all sorts of branded goods into the eagerly awaiting hands of the fans in the stands. Question answered. This lucky section of the field were being incentivised by manna, or in this case, merchandise from heaven. Rugby balls both big and small were fired into the rarified air, and the small ones would rocket into the upper echelons of the nosebleeds keeping even those higher than the Highveld ground grasping at goodies as they gasped for good gas. T shirts tightly bundled up opened like parachutes and would be snatched from the sky by grateful gatherers, and very few catches were dropped by the crowd.

No wonder they were having a ball. And catching them.

On further reflection there were similar cannons in each corner of the field, and here there was only the odd ripple of movement as something was nonchalantly shot skywards. There just wasn’t the same energised engagement as there was in the now simmering cauldron of activity in the North West.

While the other three 45 degree compass points were sitting on their plastic chairs plopping the odd piece into the chase, North West was on his feet. With long blond shaggy hair, a Tee shirt and an old pair of jeans, he would not have looked out of place on a beach with a surfboard under his arm, though he would have needed a ton of sun tan lotion to protect his very pale skin. Running up and down the sidelines he was whipping the crowd into a frenzy, and the muzzle of the cannon moved to the momentum of the crowd. Every fibre of fired freebie was a reward for crowd participation, and the conductor of this cacophony was clearly loving life in this moment. When his stock of aerial ammunition ran low he would run a recce and grab more from the other unaware artillerymen, the crowd applauding his every wild hared run, and when that was finished, he slowly and suggestively stripped off his own shirt. The T was waved teasingly, held aloft for a final begging, stuffed ceremoniously into the chute, and sent into a cotton spinning orbit towards the loudest bidders.

He exited without a shirt but with a smile, and he left to rapturous applause – from the North West anyway. Besides, the anthems were about to begin, but not before this skinny, longhaired showman had turned the mundane into the magical.

There are examples of this all over the place if we stop long enough to even care to take notice. The customs official who stamps hundreds of passports but who looks up and wishes you safe travels, or even better, welcome home. It might be the cashier who scans five times as much through her till in one hour as she earns in a month who smiles at your children. It is the traffic attendant who dances whilst directing traffic at a busy intersection, or the street sweeper in Cape Town who sings opera while he sweeps, and who will ever forget the washroom attendant who says with an untrainable smile:

‘Welcome to my office’!

There can be fewer more boring, viewless places than a filling station bathroom, but a personally torn drying towel and a sincere smile is enough magic to make money disappear from my wallet onto his side plate.

Traffic for most people can be described as a prosaic and pedestrian pastime, and some time later I was driving in the streets of Johannesburg when a billboard caught my eye:

Then another, ‘Call your Mom’ it advised.

Interesting. Perhaps there’s a storyline developing here? Must be an advertisement for some or other Telco I thought.

The third in the series said ‘Just be Kind’ – and then there was nothing.

No brand name or logo or even a recognizable swish or slogan. I thought I’d missed the fourth poster, but I would discover in the next few days that there would be other anonymous and uplifting messages.

‘Treat everyone as a friend’

Wouldn’t our organisations find a free boost of support from their cultures if these simple ideas were practiced? Fractal patterns of behaviour would spiral us forward from the power stations of potential we are, to the far flung places of possibility we could be.

‘Tell someone they look great’ (OK, this might be weird in some corporate settings, and no one wants a Hollywood lawsuit).

‘Make someone a coffee’ (We could try this in our homes too).

‘Complain less. Smile more’ (Imagine how much better teaching would take place in our schools when Heads are not swamped by too many petty parental problems).

And then one which stops me in my tracks still:

‘Forgive them and move on’.

This week we celebrate Mandela Day on the 18th July. He would have turned one hundred, and though his lungs may have stopped, his legacy lives on. If 785 000 people spend their 67 minutes next week in the service of others, that amounts to a shade over one hundred years of time. For us that’s a few minutes. For others it may be magnificent.

It’s the very least we can do.

Raise your centurion’s bat Madiba, and raise it high.

You remind us still of how to make magic out of the mundane.

And many others who have found the magic in the mundane.

And Lee Foggitt from Joburgsafaris.com who taught me to look for the magic in the mundane.

Thank You, and stay magical ! 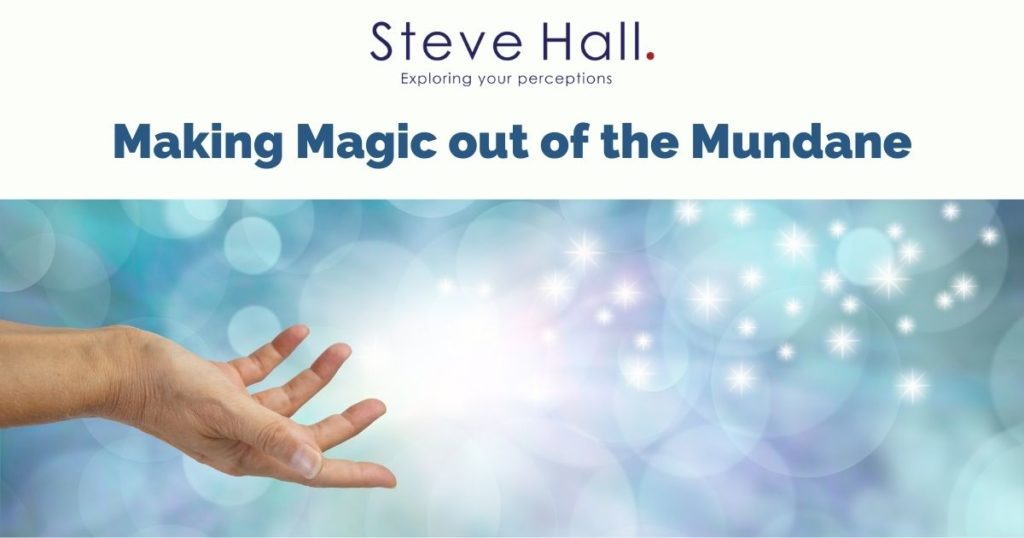