WHEN A FEATHER FINDS YOU

It was a different walk today, but then again, a walk in these parts, even over the same terrain is always different. The angle of the sunlight on to the tracks will change from moment to moment, as will the wisps and whispers of wind, and a shift in this leads to an instant shift in awareness. Yours as well as those watching you. The tracks themselves will change as they trace the story of their days and their lives in the sands of the morning newspapers, and as we walk we become more open and more aware, and we learn about our own tracks and who or what might be following us.

Today we would venture towards the sand forest with all its solitude and spirituality, and quietly we would wander in to the area of the nesting site of the greatest of all Eagles, the Crowned Eagle.

Stephanoaetus Coranatus may not be the biggest eagle in the world, but it is arguably the most powerful, and up to 90 percent of its diet is made up of mammals – and not just rats and mice, but monkeys and even bushbuck. To catch a monkey you have to have stealth and speed. To catch a bush buck you have to have strength. The Crowned Eagle has both.

The agility to move quickly and change direction in a forest canopy, and the absorption to take the hits. The great Muhammad Ali exhibited both in the famous “Rumble in the Jungle” against the seemingly unbeatable George Foreman in what may have been the greatest fight in history – but that is another story for another day.

As we left the relative openness of the sand road, we tiptoed more gently into the forest, and immediately the spongy texture of the decomposing leaves felt soft underfoot. Despite the subdued sounds of stealth, the Crowned Eagle on the nest up high heard us and took flight with its massive wings accelerating its body from a sitting still start to a flurry and a blur.

It took us a while to notice the first feather. It was lodged into the crack of a fallen trunk of an ancient Lebombo Wattle or Sand Forest Newtonia, and it required a small stretch of faith to pluck it gingerly from the dark crevasse of the slowly decaying wood. Anything could have lived there, and in the absence of real information, the pictures fabricated in the imagination seem all too frightening.

I wonder if this isn’t true of my own life, and indeed of the media? We make up some scary stories in the absence of the facts where scorpions and snakes will bring certain death should we venture into unknown territory and put our hands up into the vapours of vulnerability.

The primary plumage was pulled from its hiding place preened and pristine, and was immediately the envy of many, and in that moment of finiteness with one single feather, there seemed to be winners and losers – the haves and the have nots. Like many things in life though, awareness brings more opportunity, and soon four beautiful brown and white banded feathers were found amongst the foliage of the forest, and we felt like children on an Easter egg hunt as we gathered them up and gave them as gifts.

And what gifts these were. The indigenous people of the Americas, those who wore feathers in their headdresses, saw these fine fractal forms as gifts from the sky and the sea which transferred all the energy of its former attachment on a bird to another living being.

They arrive unexpectedly, but not without purpose, and like all gifts we should take care of them, and respect them enough to bring them out into the light, and not keep them hidden away in dark drawers or safe strong boxes.

Gifts are of course synonymous with talents.

According to the ancient wisdom of some of the Earth’s original healers, an Eagle feather would signify the heady combination of strength, courage, leadership and prestige, but such a cocktail of characteristics must be earned, and it is only done so through the carrying out of a brave deed.

That predictably left me with a question – “What has been a brave deed which I have done – One worthy of such a trophy?”

It is a question which still holds me curious in its claws.

Bravery manifests in many shapes and forms, just like leadership, and any time we leave the tracks of certainty and enter into the forests of doubt we are exhibiting bravery. When we put our hands up to volunteer even a thought, it can feel like we are sticking them into some dark spaces where the sting of criticism aches more with the acerbic attitude of arena audiences than any arachnid.

The walk back was more silent, partly because of the growing heat, but also due to a deeper reflection, yet there was time for a timeless comment.

I give thanks for that experience and for that comment, and I continue to wish you well on the road to self discovery.

For that journey though, you will apparently need the feather of a Woodpecker.

As I tracked with my Jack Russels and the Johannesburg Hadedas in my garden during this period of isolation, I found the feather of a Dove.

It carries some symbolism in that firstly it is grey in colour. Grey is the colour of neutrality, and perhaps we are in neutral stage between one world and the next.

Secondly, according to Native American wisdom, the feather of a dove represents Peace, Love and Family.

May you find the gifts and the blessings Peace, Love and spending precious time with family today. 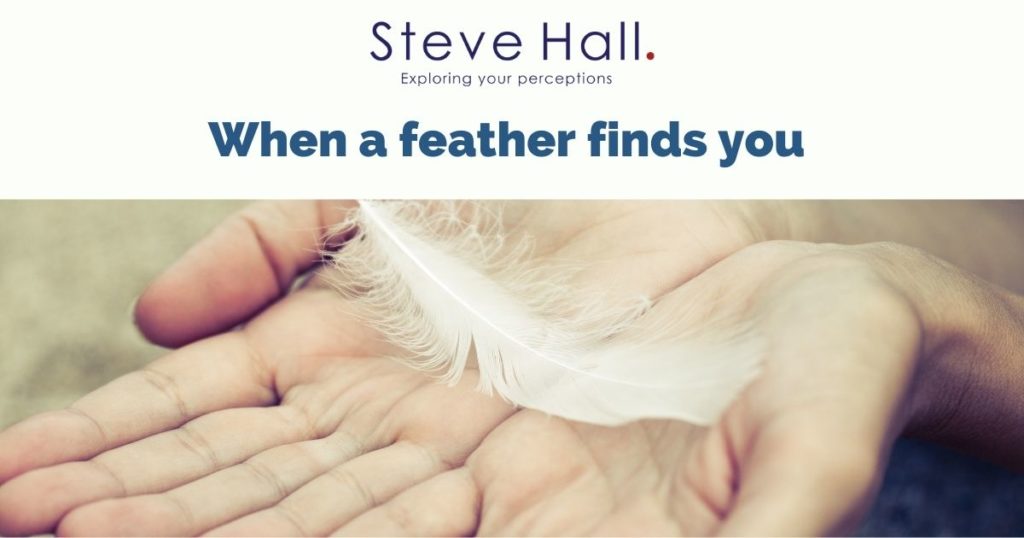